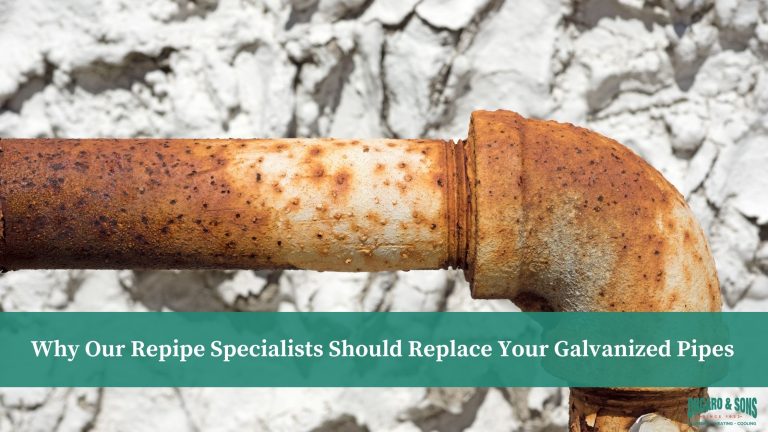 Are your water and drain pipes galvanized? We’re guessing you probably don’t know. Why should you?

Because if you have galvanized water or drain pipes, you might not only have serious plumbing problems in the near future, you could also have a serious health problem.

Water and drain pipes can be made out of a number of materials. These days, some variation of plastic and/or copper piping is preferred for home plumbing. While galvanized steel became popular for indoor plumbing in the 1940s, today it is not used, and should not be used, in home plumbing applications.

The reason for this is that even under the best conditions, galvanized pipes corrode. The problem isn’t just leaks, discolored water and low water pressure, but the possible introduction of lead into your drinking water. So it’s not only a plumbing and financial issue, but a health issue as well.

The ancient Romans used lead piping for their water systems. Unfortunately, the Romans weren’t aware that over time lead content in drinking water is harmful to human health. Some scientists maintain that the harmful effects of lead poisoning was a contributing factor to the fall of the Roman Empire.

Down through the centuries lead piping was still employed for indoor plumbing up until the 1930s. (Indeed, lead piping in Michigan is just now being replaced). Galvanized steel piping became more popular and was in use in many homes until the 1980s, when lighter weight and easier-to-use copper became the plumber’s piping of choice.

Copper is still a popular material, as are various types of plastic piping, including PVC (poly vinyl chloride) and PEX (cross-linked polyethylene) for indoor plumbing (outdoors it degrades under direct sunlight).

Galvanizing is a metallurgical process that has been used over the past 150 years to coat the outside of steel or iron with zinc to prevent corrosion. (The name comes from the Italian scientist Luigi Galvania, known primarily for his experiments with electric shocks.) Consequently, because of its anti-corrosive properties, the lifespan of galvanized piping for water delivery is anywhere between 20 to 40 years.

Sounds great, right? So why did galvanized water and drain piping fall out of favor?

While galvanized piping is resistant to corrosion on the outside, over time the interior of the pipe does break down. If you have hard water, it breaks down even faster. Also, the zinc coating doesn’t last forever, so even the outside starts to corrode. When galvanized pipes corrode, lead and other dangerous contaminants leach into your water supply.

Remember the Romans? Whether or not lead in the water actually caused the fall of an empire, lead is a dangerous substance in drinking water. Which is why the Environmental Protection Agency (EPA) has set the maximum lead contaminant level goal in drinking water at zero.

Aside from the issue of possible lead contamination, when galvanized pipes corrode, minerals build up inside the piping. Even though the pipe itself may appear perfectly fine on the outside, mineral build-up restricts water flow. This leads to low water pressure, uneven distribution of water throughout the house and discolored water that creates rust stains in porcelain fixtures. Then there is also the increased possibility of leaks, which further decreases water pressure and even water distribution.

How Do I Know If My Home Plumbing is Galvanized Piping?

So if your house is from that era, take a look at the plumbing lines beneath your sink or that run exposed in your cellar or crawl space. If the piping is gray, looking similar to nickel in color, you’ve got galvanized piping.

Do I Need to Replace Galvanized Water and Drain Pipes?

In a word, yes. If you have galvanized pipes that were installed even as late as the 1980s, they are at the end of their useful life cycle. Going back to the 1960s or even the 1940s, you are living dangerously.

The very first thing you need to do right after you call a plumber is to use bottled water for drinking. From a health perspective, bathing is relatively okay, as is washing dishes and clothes, though you’re likely to see some discoloration in your clothing if there’s a lot of sediment in the line.

If you’re thinking you might save money by only replacing the water lines for drinking, think again. Drain lines are probably corroded and if they aren’t already leaking, they are about to. This is a particular problem for galvanized piping because it is threaded to make connections between various lengths and bends of piping. These threads are made by removing material from the pipe, which thins the pipe at the point of the threaded connection, reducing the overall structural integrity. This is why the threaded joints are generally the first areas to corrode and leak.

Even worse is that since much of your interior piping is hidden beneath your walls and floor, you might not even be aware of these leaks. Not only are you losing water, which increases your utility bill, this moisture results in the growth of mold, an additional health hazard and an expense to remove.

In fact, your galvanized kitchen and laundry drain lines will be the first to fail, as these lines are more susceptible to the grease and grime that goes down them. Poorly graded and corroded pipes slow the flow of waste, and it settles in the pipe and becomes congested, eventually leading to a blockage. As the waste build-up settles in the bottom third of the pipe it eventually erodes through the bottom of the pipe and starts to leak. One way to tell whether you have this damaging waste build-up, besides the obvious leaks or back-ups, is to look at the bottom of the galvanized drainpipe. If you see rust spots or blisters, you are seeing a soon-to-be point for a leak.

How to Replace Galvanized Piping

Replacing galvanized piping is not a DIY project. You need a professional plumber.

Ongaro and Sons specializes in water and drain re-piping. This process generally takes one to three days to complete. Homes with galvanized water pipes still in use have surpassed their life expectancy, and potentially are already leaking. We realize this is an unwelcome expense. But it is a necessary one. And one that requires immediate attention – if you don’t pay for it now, you’ll pay for it even more later when you have to fix damage caused by undetected leaks, not to mention potential damage to you and your family’s well-being.

However, we understand cost can be a concern. Which is why Ongaro and Sons is offering up to $2,500 or 0% financing up to 72 months (OAC) to repipe your entire water supply and drain system.

Our professional plumbers replace your water and drain waste systems with PVC or ABS (Acrylonitrile Butadiene Styrene) pipes. These pipes are slick lined, which allows for waste to freely slide and drain. While PVC and ABS drains may still encounter clogs and back-ups from kitchen and laundry waste, plastic pipes are easily cleaned and restored.

Our mission is to provide 100% satisfaction. If you have galvanized water and drain pipes in your house, you need remediation. The sooner the better! Contact us with your questions and schedule an appointment today!